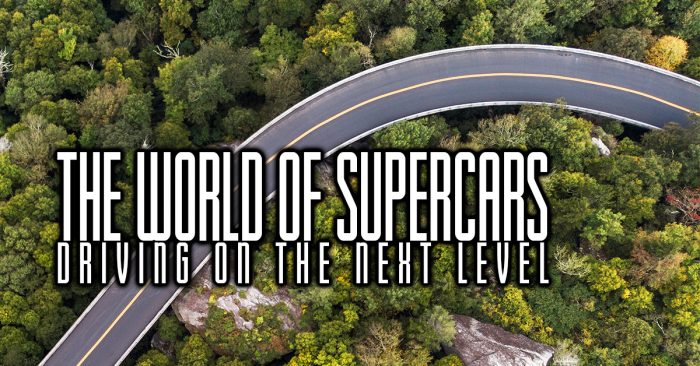 Most of us are more than satisfied with the technology, convenience, comfort and smell of a new car. A new Ford, Chevy, Honda or Toyota will do just fine, thank you. Some may have more upscale tastes, preferring a BMW, Mercedes or Lexus, for example. But there is another level of cars, available to a much smaller audience. These are cars designed for those where money is no object. This is the world of supercars, where uber-expensive cars feature attention-grabbing styling and high-performance statistics. Hang on for a glimpse into the world of supercars.

Named for the three-time Formula 1 Champion driver Aryton Senna, this McLaren is unapologetically bold. A powerful 4.0 liter, 8-cylinder engine generates an astounding 780 horsepower and 590 l-ft of torque. With a top speed of 215 mph, the Senna can rocket from zero to 60 mph in just 2.5 seconds. That’s going from a standstill to 60 in less time than it just took to read this sentence. Only about 500 of these cars were built at an estimated price of $1 million per.

This is a luxury supercar designed for those who prefer to be driven as opposed to those who enjoy driving. This is a virtual rolling office, powered by a muscular 6.0 liter W-12 engine that produces 626 horsepower and can accelerate from zero to 60 in an impressive 3.7 seconds. It is hard to imagine a car of this stature reaching a top speed of 207 mph.

This is the most powerful Aston Martin production car ever produced, and that is saying something. Its V-12, 5.2 liter, twin-turbo engine produces 715 hp and can soar from zero to 62 mph in 3.4 seconds and will top out at about 211 mph. Lightweight and beautiful, some consider this automotive art.

If an SUV could be considered a supercar the 7-seater Bentayga would be it. This is the world’s fastest SUV, with a top speed of 187 mph. A real, thrird row, 7 seater SUV with a top speed of 187. It just needed to be said twice. The Bentayga is full of excesses including front seats that adjust in 22 ways include six programmable massages. Want a black Bentayga? You’ll have a choice of 11 different shades.

Whether your car is working on its second 100,000 miles or is a restored classic, we can get your automobile insurance to suit your needs and lifestyle. Contact us for a no-obligation quote. Just tell us about you, your driving habits, and your vehicle. As an independent agency, we can search multiple insurance companies to find you a competitive rate. Contact us today!

Things That Are Hard to Find at Hotels Anymore

Thoughts About Naming a New Business

Can Healthcare Be Interesting?